In September of 2016, as part of a downsizing at the daily Pittsburgh Tribune-Review, where she had worked more than a decade, Salena Zito took a buyout. Cast amid the swelling ranks of out-of-work journalists, Ms. Zito had one advantage: That July, she had written a column predicting that Donald Trump would win the upcoming US election.

When that well-researched and highly counterintuitive forecast proved to be accurate, demand surged for Ms. Zito’s talents as a journalist. She now writes a weekly column for the New York Post, near-daily articles for the Washington Examiner and serves as a regular contributor to CNN. A book contract she received after the election resulted in the publication this spring of The Great Revolt: Inside the Populist Coalition Reshaping American Politics. Her coauthor was Republican strategist Brad Todd.

Ms. Zito’s recent success illustrates the career-making potential of a prescient prediction. It also shows the limits of journalistic analysis of voting data, and of observing America from Washington.

A lifelong resident of Pittsburgh, Ms. Zito covered the 2016 campaign from the living rooms of voters all across Pennsylvania, a crucial swing state. In an interview in July with Brunswick Partner Mike Krempasky, Ms. Zito explains how she foresaw what so many pundits missed in 2016, and looks ahead to the November mid-term elections.

On what basis were you able to call the 2016 election for Trump several months in advance?

In July of 2016, I drove through all 67 counties of Pennsylvania and found a couple of things that were surprising. One was the number of Trump signs. It wasn’t only the number of signs, but that they were homemade. That’s a different level of intensity. I saw houses painted with Trump on the side. I saw barns, I saw a horse with Trump painted on its side. Also, these signs were in areas that weren’t traditionally Republican, that had no business of showing this much enthusiasm for Trump. Other journalists didn’t see it because they weren’t visiting those counties.

A couple of things other journalists had been missing in my state, leading up to that drive: Pennsylvania, since 1996, since Bill Clinton’s second election, had become more Republican in every presidential race. Typically, analysts just look at the result, not what’s changing. They say, “Pennsylvania’s blue. Next.” But in 1996, Bill Clinton won the state with 28 of the 67 counties. By 2012, Barack Obama won 13. Also, since 2006, I’d observed that the Democrats who were winning elections were moderate, pro-life, pro-gun, fiscally conservative, pro-military Democrats.

In 2016 I identified 10 counties that needed only 2,000 more votes than they gave Mitt Romney to go for Trump. My research suggested that those counties were going to flip. And if they flipped, it didn’t matter what happened in Philadelphia. It didn’t matter if Hillary Clinton hit Obama’s numbers, it didn’t matter if she exceeded them. Which, by the way, she did. I said that if these 10 counties flipped, Trump’s going to win Pennsylvania by about 40,000 votes. I was off by 5,000. And I also believed that if Pennsylvania went for Trump, so would North Carolina, Florida, Wisconsin, Michigan, Iowa and Ohio. Why? Pennsylvania is five points more Democrat than all of those states. So in July of 2016, I essentially said, “This race is over, nobody knows it yet.”

Did it help that the area you were researching was your home state?

If you were sitting at home watching this 2016 election cycle on the national networks, what you tended to see in 2016 was the same sort of clip on every channel. You would see two or three awful Trump supporters, and seven lines that Trump said that were absolutely ridiculous. And you said, “This is never going to happen, because his people are crazy, and so is he.” But that coverage came from national reporters who flew in and arrived at rallies 10 minutes before Trump took the stage. And your natural instinct as a reporter is to interview the oddities who stand out.  The angry loudmouths.

But I’ve always lived in Pittsburgh, the Paris of Appalachia. The Scottish-Irish side of my family has been in Pennsylvania since 1638. That gave me a unique perspective. When I cover politics, I don’t fly. I only take back roads. I stay in a bed and breakfast. That’s why I had a different take. Not because I like him, not because I wanted him to win, but because I would arrive in a town a couple days before a rally, get to know the people and go with them to a rally five hours before it began. They’re with their family, they’re playing music, they bring food and the soccer chairs that they use when they go to see their kids and their grandchildren play a sport. And it’s a real sense of community. For the most part, the people there are happy. They’re not angry. They’re excited. 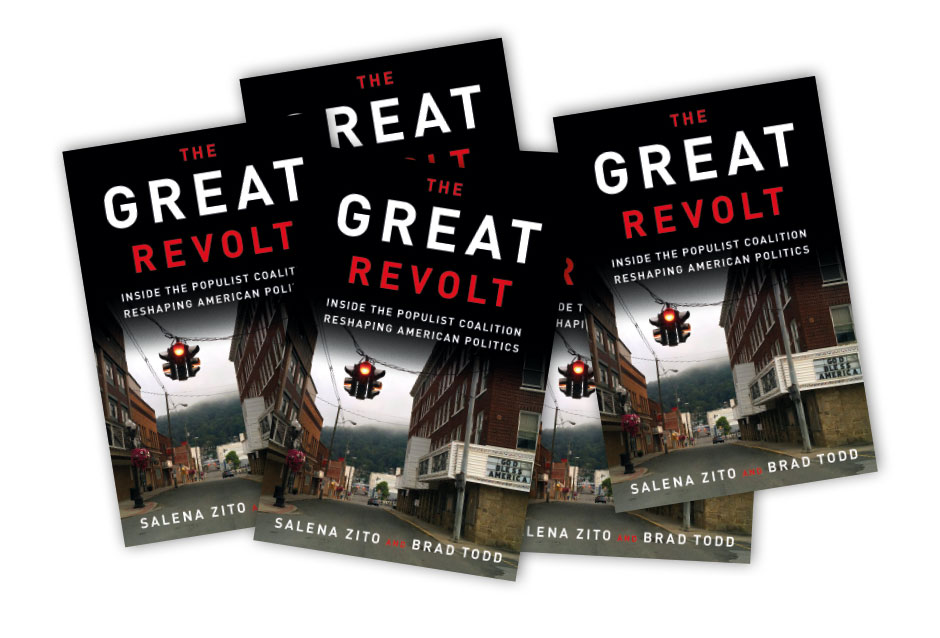 In their book, “The Great Revolt: Inside the Populist Coalition Reshaping American Politics,” Salena Zito and Brad Todd grouped Trump voters into seven archetypes, including: Red-Blooded and Blue-Collared, adults in labor or hourly positions who had faced job loss; and Silent Suburban Moms, women who didn’t broadcast their support but voted for Mr. Trump out of concern for security.

How quickly did your star rise after the election?

The day after the election, I was walking to the bakery next door to my house – because I had no job to go to – and I got a call from CNN asking me to appear on the Jake Tapper show. When I asked what the segment was going to be about, they said, “Oh, the segment’s on you. You’re the only journalist that knew Trump was going to win. And you stuck to it, despite all of the crap you took. And by the way, we’d like to hire you as a contributor.” Within the next 24 hours, the New York Post gave me a weekly column, and the Washington Examiner hired me as a staff reporter. And I had a book deal within three months. Now I also teach at Harvard. I take a class out and basically do with them what I do as a journalist – embed them in different communities, so they can see something outside of Manhattan and Los Angeles.

There seems to be a growing belief among journalists and political analysts that if they can just get more data, they can get to the answer. But it seems like what you proved is that data may actually interfere with your ability to make predictions.

You can’t just crunch numbers and predict behavior. Voting is a behavior. In the primaries, Donald Trump blew up the Republican Party, and when he did that, he blew up the predictions about who people would vote for based on who they voted for last time. Yet even then, a lot of pollsters made the assumption that voters were going to do the same thing in 2016 they did in 2012.

Pollsters forgot the human element, that people change their minds. Voters’ lives change, their families change, their work changes. And that changes how they vote. The other thing is, data can’t detect emotion. It can’t understand why people voted for Barack Obama in the first place. The pollsters believed it was party identity. In fact, Barack Obama was more of a unicorn. It’s not that people shifted left and believed in the politics that he espoused, but they liked the idea of someone different, someone they hoped would be good for the country.

How do journalists use Twitter without it skewing  their perspective on the world?

I think only something like 16 percent of Americans had signed up for Twitter, and only 40 percent of them have ever tweeted. It’s an echo chamber. I try to use it as a way to share photos and stories. But when you communicate with someone on Twitter, you aren't watching their facial expressions. You aren’t conducting an in-depth interview.

Do you have a sense as to what’s going to happen nationally in the mid-term elections?

My job always has me out on the ground. I just had a story last week from Bucks County, a suburban district that the experts are saying the Republican Brian Fitzpatrick is going to lose. I was like, “No, he’s not.” I interviewed a bunch of suburban Democratic women who hate Trump but who like Fitzpatrick, and are able to separate the two men, and will be voting for Fitzpatrick. So I still think we’re not doing enough good shoe-leather journalism to understand this country.

As for the national picture, I’m not convinced that there’s a blue wave for the Democrats. It doesn’t mean it won’t happen, I just haven’t seen it yet. I think the challenge for Democrats is the emergence of the sort of socialist wing of the party. They face the challenge of, “Will Never Trumpers and moderates come out and support socialist platforms?”

At this moment, the Trump coalition is intact. This modern populist movement isn’t what you saw in the 1930s. This is a healthy skepticism of all things big. Big government, big media, big sport. Big institutions have lost the trust of these voters. Donald Trump did not cause this. He’s just the result of it. And my profession keeps focusing on him, and still continues to ignore the people who put him in office, and why.

Mike Krempasky is Partner and Head of Brunswick’s Digital specialty, based in Washington, DC.