When the global newspaper of finance and business calls for a reset of capitalism, it’s serious. Roula Khalaf, the first female editor of the Financial Times since its founding in 1888, talks with Brunswick’s Caroline Daniel.

Roula Khalaf took over as Editor of the Financial Times only a few months before the global pandemic, having to navigate not just a new role but how to create distinctive global journalism, remotely. Long seen as the “paper of record” for business, the FT in recent years has more openly questioned the role of business in society—including through the launch of Moral Money in 2019; its broader “Capitalism: time for a reset” brand campaign; and the launch of a Financial Literacy and Inclusion Campaign, its first charitable foundation. Roula spoke to Brunswick’s Caroline Daniel about the impact of the pandemic and how it’s accelerating the debate about the future of capitalism.

Few would have expected the FT to ever call for a “reset of capitalism.” What’s behind the move?
The FT has always been pro-business and pro-markets and that will not change. What we do increasingly however is ask tough questions about how businesses and markets should be run and the purpose they serve. Many CEOs themselves are thinking about these questions in light of rising inequality, the climate crisis, and political instability. Our role is to help provide some of the answers but also to hold business and politicians to account.

Has there been any resistance from readers?
Our readers are a diverse audience. They don’t all speak with one voice. Some have cheered us on, others certainly think that “responsible capitalism” is just a distraction and that the only solid way to judge a company is on its return to shareholders. We know that our readers are intelligent and we trust them to hear all sides and come to their own conclusions.

A number of FT pieces described the pandemic as a sort of “test of character” for business. Has business passed that test?
It’s too early to say. We have to watch the recovery over a longer term to see if businesses live up to their statements during the crisis. The other question is the extent of government stimulus beyond emergency measures and the kind of conditionality attached.

Which companies do you see as leading this agenda? Or indeed, not rising to it?There are obvious players that have done more than others and we have written extensively on them. The more significant issue for me is how companies emerging from the pandemic perform: do they allow a more responsible agenda to slip back? Will the pandemic act as the excuse to delay the responsible agenda?

What geographic differences do you see in this ESG agenda?
There are clear political differences on the environmental issue. In the EU and the UK, governments are at least trying to lead the way and to give business a framework. In the US there is a glaring lack of political leadership on climate at the national level but less so at state level. But it’s also important to look beyond the West, notably to India and China, where these issues play out very differently.

The UN Secretary General has said the world should aim to do more than recover, but to “recover better.” Are you optimistic about this, or will it be back to business as usual?
It’s very early in the recovery to judge. There will be a huge impetus to get back to normal. So I would look more at specific areas where hopefully we can see improvements post-pandemic. I wonder, for instance, if we will see changes in the labor market. The pandemic has shown how many vital workers are underpaid or precarious.

It seems to us that there aren’t many business leaders left who think their sole job is to create value for shareholders; many will now tell you they also need to create value for society. Or do you worry this is just talk?
I agree. Many companies are talking the talk but not acting. However, the fact that they feel the need to make statements is a sign of the pressure they are under. I think that pressure—including from their own staff—will continue. 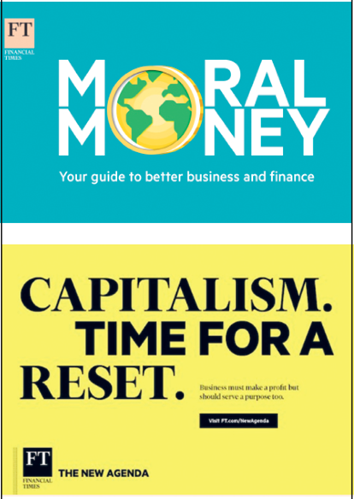 The FT has been reappraising the role of business and the capital markets in society. It launched Moral Money in 2019, a platform for “news and analysis on the fast-expanding world of responsible business and sustainable finance” and other such issues, from ESG to the UN’s SDGs. A few months later, the FT’s new brand campaign, The New Agenda, carried a pithy message on the future of capitalism.

You have said “the FT is not unquestioningly pro-market and pro-business. We want to hold business to account and we’ve always held business to account.” Obviously your work on the fraud at Wirecard is a great example of that. But what is it about business behavior more broadly that concerns you most as a paper?
In the case of Wirecard, our investigation has uncovered a fraud that ultimately made the company insolvent. When managers at a company are misleading their shareholders and the public, that is obviously a problem. Beyond that, we are very concerned about environmental behavior and labor practices. We are going to increase our coverage further in that area. We are also always watching for behavior that creates undue risks for investors or the wider financial system.

This year, some CEOs who spoke out in support of Black Lives Matter faced accusations of “virtue signaling”—talking about racial justice but having little to say on the economic inequalities that underpin it. How should CEOs respond?
I think for too long many executives assumed that being appalled by racism was enough and “best efforts” to achieve racial diversity were sufficient. Now every CEO I speak with knows that it is time for meaningful change, for action, in hiring practices, in promotions. The pressure is enormous and it comes from inside and outside companies.

McKinsey published a report earlier this year saying that progress on Inclusion & Diversity has stalled in many companies. Do you think the Black Lives Matter movement might reenergize the entire I&D conversation in business?
Absolutely, it’s clear that the Black Lives Matter demonstrations have been a wake up call. It’s unfortunate that it has taken a tragedy to open our eyes to the fact that “trying” to achieve racial diversity is not enough. It needs to happen.

As companies look to position themselves for recovery, we’re finding that more and more are seeking to articulate a clear corporate purpose. Would you have any advice for such companies?
It’s not just about coming up with a statement in the boardroom. It’s about making sure that those within the company believe that there is a culture and a set of values that underpin your company and are shared throughout the organization.

The bar has been raised: these days almost every company has some form of social impact initiative. What does it take to be a real leader in creating social value today?
The pressure for more responsible business raises the bar for executives. You have to balance a number of stakeholders and obligations, which sometimes conflict. I think it’s important to have a clear sense of your objectives and build consensus around them. It’s also important to show meaningful change.

Caroline Daniel is a Partner advising clients on media and technology. She previously held a number of senior editorial and correspondent positions at the Financial Times, including Editor of the Weekend FT.