A global study by Brunswick Insight finds that the younger generations look at the world tomorrow, and businesses today, with optimism. Robert Moran and Jeremy Ruch report

There is a saying that the plural of anecdote is not data. Brunswick Insight surveyed more than 42,000 people across 26 countries to test, among other things, much of the perceived wisdom and stereotypes about age groups – to see if the popular anecdotes matched the  data. Do organizations really need to reinvent themselves to keep Millennials happy? Are big businesses out of touch with younger generations, and widely seen as part of the problem rather than the solution?

We found that the starkest differences between generations emerge on questions about how well things were going today, and how well they were likely to be going tomorrow – especially on questions about financial security and well-being. For all their differences, generations broadly agree that technology and business are forces for good today. They also believe businesses to be the most effective path to solving national challenges, although skepticism remains, especially regarding business leaders and their ability to relate to everyday people.

All this points to the need for businesses to hone a relevant and informed point of view, to further tip the scales of stakeholder opinion in their favor.

The young have long been considered more idealistic. It turns out that they are also more positive. Across the globe, more people thought things were going well than not. Brunswick Insight found that those between 18 and 24 years old were the most positive, closely followed by those 25 to 29 and 30 to 34. The shift from positivity to negativity took place among those 45 to 49 years old, and held true for every older age group.

Perhaps it doesn’t seem such a dramatic revelation that negativity increases as people get older. But already we’ve seen that divide at work in both the UK Referendum vote and 2016 US presidential election. As the charts below show, perceived country well-being in the US and UK was divided between young and old, a difference that carried over to the ballot boxes.

New trends emerge when the data is broken down by country. The UK and the US straddle the mean: a slight majority of British citizens think their country is doing well, while a slight majority of Americans think their country is on the wrong track. However, in France, Brazil and Italy, pessimism carried the day – close to 80 percent of respondents believed things weren’t going well. Conversely, more than 70 percent of people in the UAE, China, Switzerland, Indonesia, Singapore, Sweden, India and the Netherlands were happy with the current state of affairs. While members of the oldest generation tend to be the least positive in these countries, they were still more so than the young in countries dominated by negativity.

Despite a common perception that older generations are fearful of being left behind by technology, across the board, in every country, in every age group, the pace of technology is seen to be fast – and good.

Older generations do, however, feel that they have been left behind financially. While the young and middle-aged rate their own finances better than most people their age in their country, those aged 50 and above think they are doing worse. While every age group believes they are doing better than their parents when they were their age, those over 60 years old believe that when today’s children reach their age, they will be doing worse.

This view is exacerbated by a country’s overall wealth. There are stark contrasts between financial optimism in developing countries and anxiety in advanced economies, where few believe that their children will have a better financial future than they have. France is the most pessimistic; UK, Germany and the US are all significantly more negative than the average.

Part of the solution

Who do people believe are most capable of solving the array of problems facing their countries? When asked to choose between six types of institutions – businesses, government, academic institutions, nonprofit organizations, the military and religious institutions – business was the top choice for every age group. When asked to choose which of the six categories of institutions most represents their interests, respondents again overwhelmingly chose business. In countries such as South Africa and the US, not only did business come first, government came in last – and rather convincingly.

Across countries and generations, there is broad agreement that business success is a common good; people believe that when businesses do well, the entire country benefits.

Businesses as a whole enjoyed a better reputation than the people who lead them. Three in five (59 percent) think that business leaders don’t understand the challenges they face, and just 7 percent disagree with the statement “business leaders in my country make too much money.”

When asked whether “businesses in my country are honest and trustworthy,” the response was better but still half-hearted: 37 percent agreed while 26 percent disagreed. In what could be viewed as an opportunity for businesses, a number of respondents were neutral on the issue, neither agreeing nor disagreeing – opinions that might be changed with compelling messages and stories.

Global economic concepts elicited similar ambiguity. While 58 percent have a positive view of international trade, only 45 percent feel that way about globalization; 33 percent have a positive view of capitalism, as opposed to 55 percent on the free market economy. Among many possible conclusions, one appears inescapable: the words businesses and governments use matter greatly. 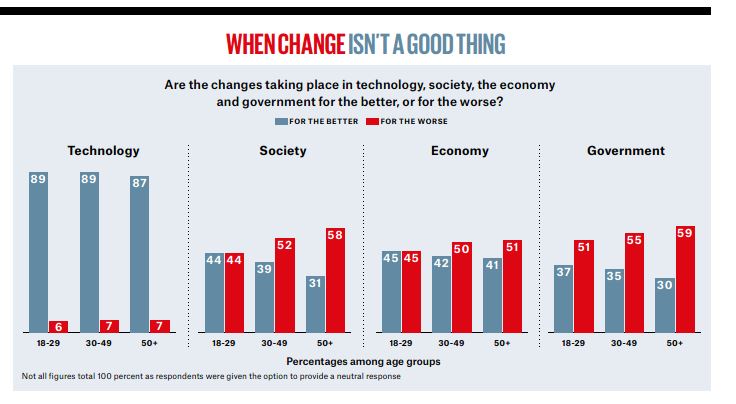 Not all respondents feel change is taking place. But among those who do, opinions are divided along generational lines about whether the change is good or bad. The oldest generation is most likely to believe things are changing and most likely to regard the change negatively. Almost 60 percent of those aged 50 or older say societal and government changes are for the worse 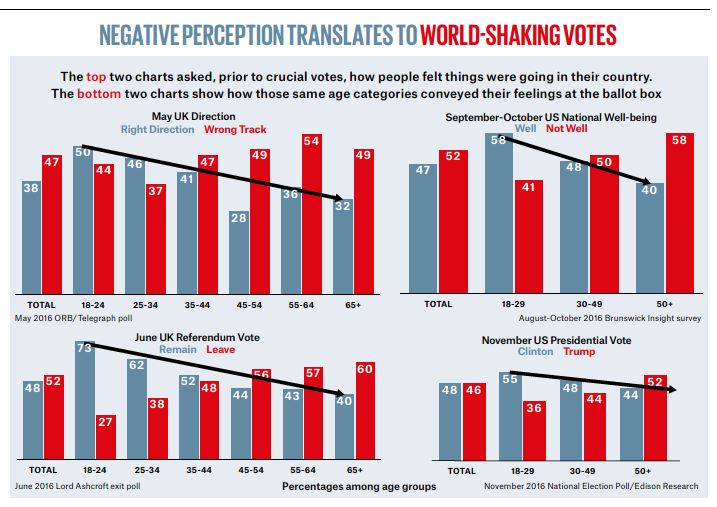 Seismic political change in the US and UK stemmed, in part, from widespread negativity among the older generations. Though the margins may not appear exceptionally wide, they were enough to decide two close votes 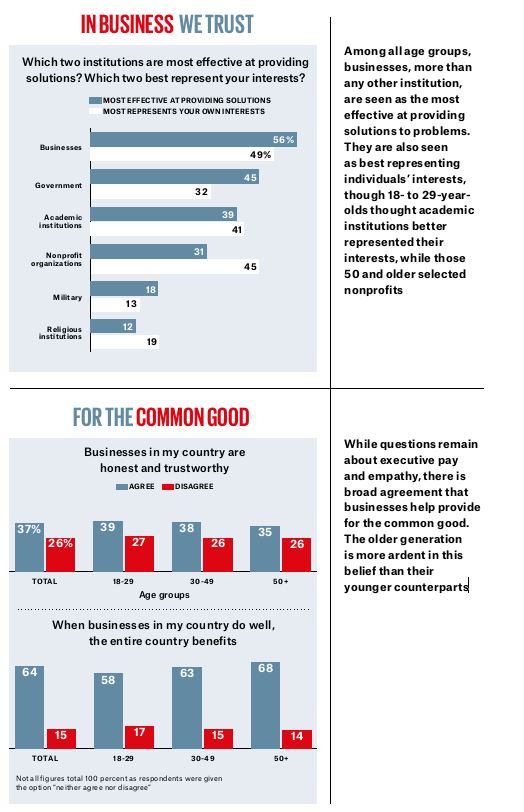 Among all age groups, businesses, more than any other institution, are seen as the most effective at providing solutions to problems. They are also seen as best representing individuals’ interests, though 18- to 29-year-olds thought academic institutions better represented their interests, while those 50 and older selected nonprofits

While questions remain about executive pay and empathy, there is broad agreement that businesses help provide for the common good. The older generation is more ardent in this belief than their younger counterparts 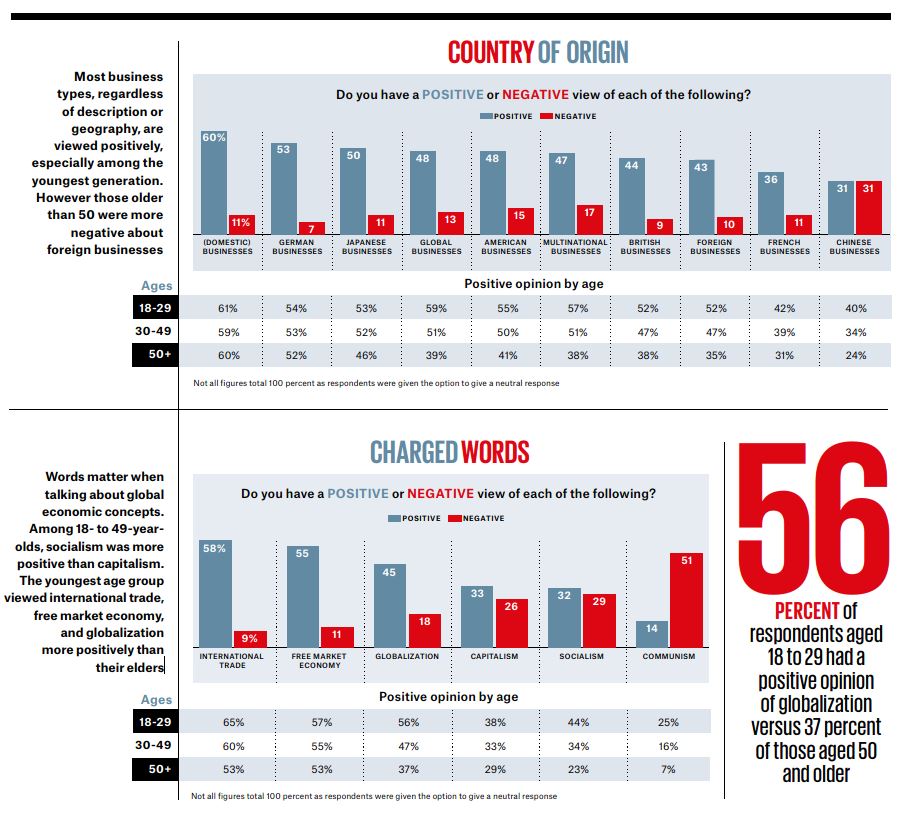 Most business types, regardless of description or geography, are viewed positively, especially among the youngest generation. However those older than 50 were more negative about foreign businesses

Health data can save lives, but protecting privacy is critical for public support.