Navigating the European Green Deal: Business and the sustainability transition

With its European Green Deal, the EU has embarked on a journey to become the world’s first climate neutral continent by 2050. The roadmap lays out a holistic sustainability approach that covers all parts of the economy and society, promising to reconcile the challenges of climate change and environmental degradation with continued economic growth.

Already, the impact of the European Green Deal can be felt far beyond the borders of the EU. Businesses in particular will have to adjust their long-term strategies, reassess investment plans, rethink how they use raw materials, clean up supply chains and, above all, be transparent about how they do it. The European Green Deal, however, is more than a challenge to the way we do business. It presents companies with untold opportunities to help shape a more sustainable and livable world.

Sustainable Finance: How can the financial sector become a true engine of the European Green Deal?

Realizing those opportunities will require continued and open dialogue with all stakeholders, including policymakers, NGOs, academia, investors and employees, on a broad range of questions. What regulatory changes are required to decarbonize the economy? What technologies should be prioritized and how do we ensure efficient investment in those areas? How can we ensure clean, fair and ethical supply chains? Can the EU export the Green Deal through trade?

Join renowned European think tank Jacques Delors Institute and Brunswick Group for an exclusive webinar series dedicated to the question how businesses can navigate the European Green Deal. We look forward to lively and interactive discussions with leading experts from EU institutions, national governments, the private and not-for-profit sectors and a pan-European audience.

The series launched in February 2021:

Geneviève Pons was in charge of environmental and climate matters in Mr. Jacques Delors’ Cabinet during his last two mandates as President of the European Commission (EC) (1991-1995). She thereafter held several management positions at the EC. In 2013, Geneviève was appointed Director of the ILO’s Legal Service, and in June of 2015 as Director of the WWF’s European Office. From November 2017 until December 2019, she headed Jacques Delors Institute’s Brussels Office. In January 2020, she was appointed as the head of Europe Jacques Delors (AISBL), the latest in the family of think tanks carrying on Jacques Delors’ European vision. She is a graduate from Sciences-Po Paris, the Sorbonne, and ENA.

Genevieve is considered by Politico as one of the most influential women in Brussels, notably in the field of environment. She is an active member of Ocean Unite and of the Antarctica2020 coalition, which aims to protect the vast marine areas around Antarctica.

Since 2019, alongside Pascal Lamy and Pierre Leturcq, Geneviève has published a series of articles on trade and the environment, the first, second, third and fourth of which are currently available. All her recent publications can be found here.

Geneviève Pons is a Knight of the Legion of Honour. 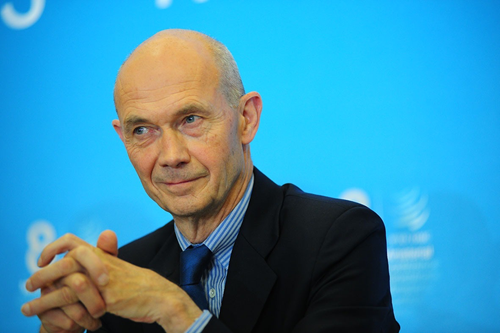 Pascal Lamy (pascallamy.eu) is the President of the Paris Peace Forum and Brunswick Europe Chair. He is special advisor to the European Commission and the Chair of the Commission's Mission Healthy Oceans, Seas, Coastal and Inland Waters.

How important are ethics when making business decisions within the tech sector?