In 1668, medicines consisted of a variety of natural ingredients. Formulations were imprecise, with little in the way of standards or regulation. The practice of creating medicines was more of an art or handicraft than a science.

Merck KGaA was born in that year when Friedrich Jacob Merck bought a pharmacy in Darmstadt. His descendants still run the company, making it one of the world’s oldest family-run businesses. Over 349 years and 12 generations (with the 13th recently born), the Merck family has grown the enterprise into one of the world’s leading international science and technology companies with more than 50,000 employees across 66 countries.

“There are a number of reasons why the company and the family have survived for 13 generations,” Frank Stangenberg-Haverkamp, Chairman of the Family Board and Chairman of the Executive Board of E. Merck KG, says. “It stems from the culture of trusteeship for future generations, the humility of the family and its members, and a tradition of togetherness rather than conflict.”

In addition, he says, Merck’s leadership puts “company before family” and maintains “a fundamental trust in our management and employees.” That responsibility and trust support three key working principles that sustain the business’s momentum across the centuries: scientific curiosity, values-driven management and meaningful identity. 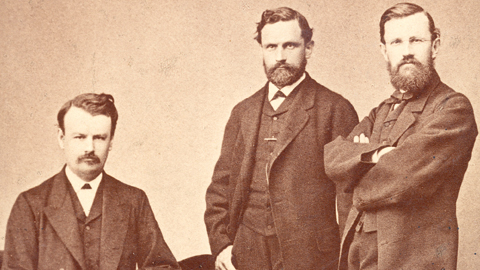 An 1865 portrait shows Wilhelm, Georg and Carl Merck, leaders of the company and the sons of Emanuel Merck.

In 1827, a breakthrough in techniques transformed the company. Medical science was still in its infancy, but pharmacist Emanuel Merck concentrated on the study of the chemistry of natural plant substances – specifically alkaloid research, such as the commercial extraction of morphine from opium. The purity of alkaloids manufactured by Merck soon surpassed all of its contemporaries in the industry. As a result of Emanuel’s work – five generations after Friedrich founded the company – Merck shifted from a pharmacy to an industrial company, and the pharmaceuticals industry itself moved finally from a craft to a science.

“Our success story is the outcome of a tremendous research spirit and strong passion for discovery,” Stefan Oschmann, CEO of Merck KGaA said at a recent shareholders’ meeting. “We are at the threshold of a technological development whose potential we cannot even estimate yet. But I do know one thing: scientific curiosity will remain our driving force.”

Merck KGaA, Darmstadt, Germany is no longer connected in any way, shape or form to Merck Sharp & Dohme Corp (MSD), the successor to its former US subsidiary Merck & Co. By agreement, Merck in Germany holds global rights to the Merck name with the exception of the US and Canada, where it operates as EMD Serono, MilliporeSigma and EMD Performance Materials.

The company and the family

Emanuel Merck was not only a scientist but a talented business leader who altered the management structure of the company in a partnership. The involvement of Emanuel’s three sons – a businessman, a pharmacist and a chemist – expanded the expertise within the company’s leadership and helped transform the business. In doing so, Emanuel also established the principles behind the family’s leadership and long-term vision that last to this day. With a 70 percent stake in the company, the family today is responsible for the strategic direction of the business, managed through the parent company E. Merck KG. Family members share a common understanding of business values and a sense of responsibility to the next generation.

For more than 100 years, Merck has strictly separated the operational management of its businesses from its owners. In doing so, the family prevents itself from interfering in daily operations, while still enabling efficient communication and fast decision-making. All Executive Board members and executive representatives of the Merck family are personally liable for the fortunes and misfortunes of the business. The external managers of the Executive Board are partners, not employees – the company sees them as temporary family members. 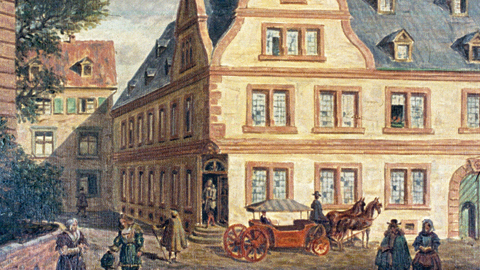 Over the last decade, under the leadership of CEO Karl-Ludwig Kley, Merck has completed €40 billion ($44.7 billion) in acquisitions – one of the greatest transformations in the company’s history, second only to its rise from the ashes after World War II. At the same time, the company has divested itself of its less innovative products and services, including the sale of several divisions. Sales over 10 years have climbed from €7 billion to €15 billion, and profits from €1 billion to €2.5 billion.

Yet Merck’s core remains what it has always been, shaped by the influential role of the family and its values: courage, achievement, responsibility, respect, integrity and transparency. They have been pillars of our culture since the time of Emanuel Merck in the 19th century.

Over the centuries, the notion of “family” has provided solidarity and cohesion. We find younger workers today, Millennials, are drawn to our sense of purpose as they seek direction and meaning to their work. “Family” is like a lighthouse – a guiding spirit in the sometimes dark and stormy business landscape. It’s not far-fetched to say that the concept of Merck will serve as a source of inspiration and purpose for the next generation and generations to come well into the future.

Dr Walter Huber is the Managing Director of the Merck Family Foundation, Darmstadt, and a former Senior Vice President of Corporate Communications for the Merck Group, in Darmstadt. He joined Merck KGaA in 1991 as Head of Public Affairs after three years as Head of Public Relations at Upjohn in Germany.

How companies articulate their ESG agenda matters more than ever. For the healthcare sector, which is experiencing a period of rapid change in its ESG fortunes, the issue is increasingly important.

Healthcare is Disproportionately Susceptible to Extortion

Few doubt that managing down technology risks is critical to the development of effective and efficient healthcare.