Social media as a weapon

What do Isis and Taylor Swift have in common?

According to author and digital-security strategist Peter Singer, both the terrorist organization and pop star are fighting for your attention online and employing similar tactics to try and win it. 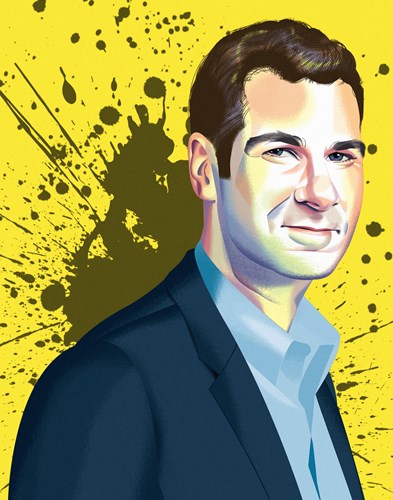 ISIS kicked off its 2014 invasion of Mosul with the hashtag, “#AllEyesonISIS.” More recently, the terror group posted photos of its members holding cute cats in an effort to make them more relatable – tactics familiar to most celebrities and online marketers around the world.

These online battles, the rules governing them, and their real-world impact are the focus of Mr. Singer’s latest book, LikeWar, which he coauthored with Emerson T. Brooking, at the time a research fellow with the Council of Foreign Relations.

“A generation ago people talked about the emergence of cyber war, the hacking of networks. A ‘LikeWar’ is the flip side: the hacking of people and ideas on those networks. Power in this conflict is the command of attention,” says Mr. Singer, who in addition to his writing is also a strategist and Senior Fellow at the New America Foundation.

Pretty much everyone who posts online – from governments to marketers to reality TV stars – is a combatant in this fight for virality, according to Mr. Singer. Triumph in a “LikeWar” and you command attention to your product or propaganda or personality. Lose and you cede control of the spotlight and the agenda.

Mr. Singer recently spoke with Brunswick’s Siobhan Gorman about the trends he’s seeing in LikeWars around the world, and what companies can do to avoid being on the losing end.

What were you most surprised by in researching LikeWar?

One of the more interesting characters in the book was at one time voted TV’s greatest villain: Spencer Pratt, a reality TV star on MTV’s “The Hills.” He’s basically one of these people who became famous almost for nothing.

But what Pratt figured out really early was the power of narrative, which allowed him to become famous through, as he put it, “manipulating the media.”

Spencer Pratt, a reality TV star… understood more of what was playing out online than the person at the State Department.”

How much have online conflicts changed the rules in the last few years?

First, the internet has left adolescence. It’s only just now starting to flex its muscles and deal with some of its responsibilities. The structure of the network changes how these battles play out. So, it’s this contest of both psychological but also algorithmic manipulation. What you see go across your screen on social media is not always decided by you. The rule makers of this global fight are a handful of Silicon Valley engineers.

Another aspect of it is that social media has effectively rendered secrets of any consequence almost impossible to keep. As one CIA person put it to us, “secrets now come with a half-life.” Virality matters more than veracity; the truth doesn’t always win out. In fact, the truth can be buried underneath a sea of lies and likes.

And the last part is that we’re all part of it. All of our decisions as individuals shape which side gets attention, and therefore which side wins out.

But you highlight that this is playing out differently in China.

Exactly. There are two different models shaping the internet, and shaping people’s behavior through the internet, playing out in the West and in China. Essentially, internet activity in China is all combined. Look at WeChat, which is used for everything from social media to mobile payment; it’s Amazon meets Facebook meets Pizza Hut delivery. And you combine that with an authoritarian government that’s had a multi-decade plan for building out surveillance, and you get the social credit system, which is like Orwellian surveillance crossed with marketing.

The social credit system allows both companies and the government to mine and combine all the different points of information that an online citizen in China reveals of themselves, and then use that to create a single score – think of it as your financial credit score of your “trustworthiness.”

For example, if you buy diapers your score goes up, because that indicates you’re a parent and a good parent. If you play video games for longer than an hour your score goes down because you’re wasting time online. And it’s all networked. Your friends and family know your score.

It creates a soft form of collective censorship; if your brother posts something that’s critical of the government, you’re the one who goes to him and says, “Knock it off ’cause you’re hurting my score.” And you do that because the score has real consequences. Already it’s being used for everything from seating on trains and job applications to online dating. Your score literally shapes your romantic prospects.

So, you have this massive global competition between Chinese tech companies and other global tech companies not only for access to markets, but also for whose vision of the internet is going to win out. 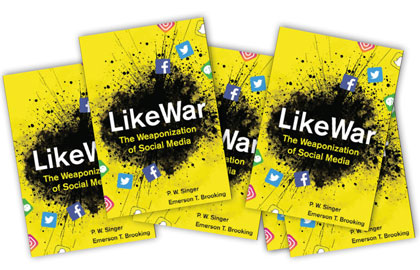 How can companies win a “LikeWar”?

Everyone’s wondering: What are the best ways to drive your message out there and have it triumph over others? The best companies I’ve seen create a narrative, have a story and have emotion – in particular, they have emotion that provokes a reaction of some kind.

It’s all about planned authenticity. That sounds like a contradiction, but it’s about acting in ways that are genuine, but are also tailored because you’re aware that the world is watching you.

A good comparison here is Wendy’s versus Hillary Clinton. Wendy’s is a hamburger chain – not a real person – but it acts and comes across as “authentic” online and has developed a massive following. They’re funny, irreverent.

Yet Hillary Clinton – a very real person – never felt very authentic in her online messaging. And that’s because it involved a large number of people – by one account, 11 different people – all weighing in on what should be tweeted out.

How do you measure and gauge battles online now? Is it just volume?

It all depends on what your battle is, what your end goal is. Is it driving sales? Is it getting people to vote for you, to show up to your conference?

This is what the US gets wrong about Russian propaganda and its disinformation campaigns. We think they’re designed to make people love or trust a government. From its very start back in the 1920s, the goal of propaganda coming from the Soviet Union, and today Russia, has been instead to make you distrust – distrust everything, disbelieve everything. And we can see it’s been incredibly effective for them.

How effective have disinformation campaigns actually been in the US? What can be done?

One of the scariest and maybe saddest things we discovered is that the US is now the story that other nations point to as the example of what you don’t want to have happen.

There’s no silver bullet, of course. But one example was something called the Active Measures Working Group, a Cold War organization that brought together the intelligence community, diplomats and communicators to identify incoming KGB disinformation campaigns and then develop responses to them. We’re dealing with the modern, way more effective online version of something similar, and we haven’t got anything like that.

There are also digital literacy programs. I find it stunning that the US supports education programs to help citizens and kids in Ukraine learn about what to do and how to think about online disinformation, but we don’t do that for our own students.

The other is to seek out the truth. How do we do that? And the best way is to remember the ancient parable of the blind man and the elephant – don’t just rely on one source, pull from multiple different sources. That’s been proven in a series of academic studies as the best way to find the facts online. It’s not exactly new, but it’s effective.

Where will the next online war be fought?

The cell phone in your pocket, or if we’re being futuristic, the augmented reality glasses that you wear as you walk down the street. It’ll come from the keepsake videos that you play on them.

What we’re seeing playing out now are called “deep fakes,” which use artificial intelligence to create hyper-realistic videos and images. There’s also “madcoms,” which are hyper-realistic chat bots that make it seem like you’re talking to another person online. Combine the two, and the voices, the images, the information that we’ll increasingly see online might be fake, but hyper-realistic.

The tools that militaries and tech companies are using to fight back against the AI-created deep fakes are other AI. So, the future of online conflict looks like it’ll be two AIs battling back and forth.

Let me give you a historic parallel, because we’ve been dealing with these issues for a very long time. The first newspaper came when a German printer figured out a way to monetize his press’s downtime by publishing a weekly collection of news and advice. And in publishing the first newspaper, he created an entire industry, a new profession that sold information itself. And it created a market for something that had never before existed – but in creating that market, truth has often fallen by the wayside.

One of the very first newspapers in America about a century later was called the New England Courant. It published a series of letters by
a woman named Mrs. Silence Do-good. The actual writer of the letters was a 16-year-old apprentice at the newspaper named Benjamin Franklin, making him the founding father of fake news in America. In some sense it’s always been there, using deception and marketing to persuade people to your view.