Since the onset of Covid-19, there has been an unprecedented change in how businesses have had to conduct their operations. Entire industries and workforces have been asked to work from home, while other sectors face the prospect of being shut down for the duration of the crisis.

Brunswick Insight has conducted a survey of institutional investors regularly since 2009 to understand how they use digital sources. This survey takes on a new level of importance in the context of Covid-19. It provides a guide for how companies can reach investors when in-face meetings are no longer possible, and suggests trends that may accelerate as more investors get used to working remotely. Given the importance of understanding how information is reaching investors in the current climate, what specific outlets are they using?

When the investor survey started in 2009, “digital media” consisted primarily of blogs, Facebook and Twitter. Since then, many additional sources have become available, including LinkedIn, email newsletters and, most recently, financial podcasts. All of them are at play as investors show a consistent interest in finding digital sources that provide them with in-depth understanding of key topics.

Blogs: Consistently these are some of the most important sources for investors. Among our respondents, 70 percent reported using blogs in their research, with 38 percent using them to make their own investment decisions. When pressed on which blog is the most helpful, Seeking Alpha is the most often cited.

LinkedIn: First included in the survey in 2016, LinkedIn was initially used by only 4 percent of investors to inform their investment decision. Today, it is used by at least one in five investors (20 percent). This dramatic growth reflects the expansion of the site’s mission from purely networking and job-search to providing content for thought leadership and insight about companies and trends.

Podcasts: Long-form podcasts covering business news and financial developments have emerged as a critical source of information for investors. No single podcast is the go-to source, but Bloomberg, NPR and The Economist are among the producers most cited. Twenty-nine percent of investors surveyed said they use podcasts to make investment decisions, indicating a high degree of trust in this source.

The most important sources are not always the ones with the highest use rate. Sources underused now can still be significant with key audiences, while other sources have limited use globally but over-index in specific regions.

Reddit: An under-consulted source, Reddit is used by only 6 percent of surveyed investors globally. However, the age of the investor appears to be a notable factor here. Among those under 29, we find 13 percent consult Reddit for investment decisions. Among those in their thirties, it’s 10 percent.

Specifically, investors cited subreddits including r/investing, r/SecurityAnalysis and even unconventional sources such as r/WallStreetBets. The content here may pose significant challenges to companies used to more traditional outlets and suggests the next generation of investors will be especially open to alternative sources of information.

WeChat: Globally, WeChat is used by only 9 percent of surveyed investors. However, among investors in China and Hong Kong, WeChat is the single most important digital source used by investors, with 70 percent using it for information on their investment decisions. As finance grows in China, global companies will need to take seriously the information channels relevant to that market.

With trust in traditional media eroding and skepticism of mainstream information sources increasing, the Digital Investor Survey tracked trust levels in digital sources compared to traditional print and broadcast media. While certain mainstream sources maintain a dominant position, many digital sources are proving their ability to compete for trust.

Some digital sources have the potential to overtake several mainstream outlets as trusted sources of information. LinkedIn, podcasts and even newsletters are surprisingly trusted platforms, though some services, such as Facebook, struggle in this respect. These more trusted digital media rank ahead of broadcast sources and right behind the stalwart mainstream sources, such as The Wall Street Journal and Bloomberg Terminals.

All of this shows a dramatic change since 2009. While digital sources have yet to eclipse traditional media, it is clear that institutional investors have made digital sources a critical part of their toolkits.

In light of the new realities emerging during the Covid-19 pandemic, developing a comprehensive digital strategy that reflects this shift will be a key part of how they move forward. 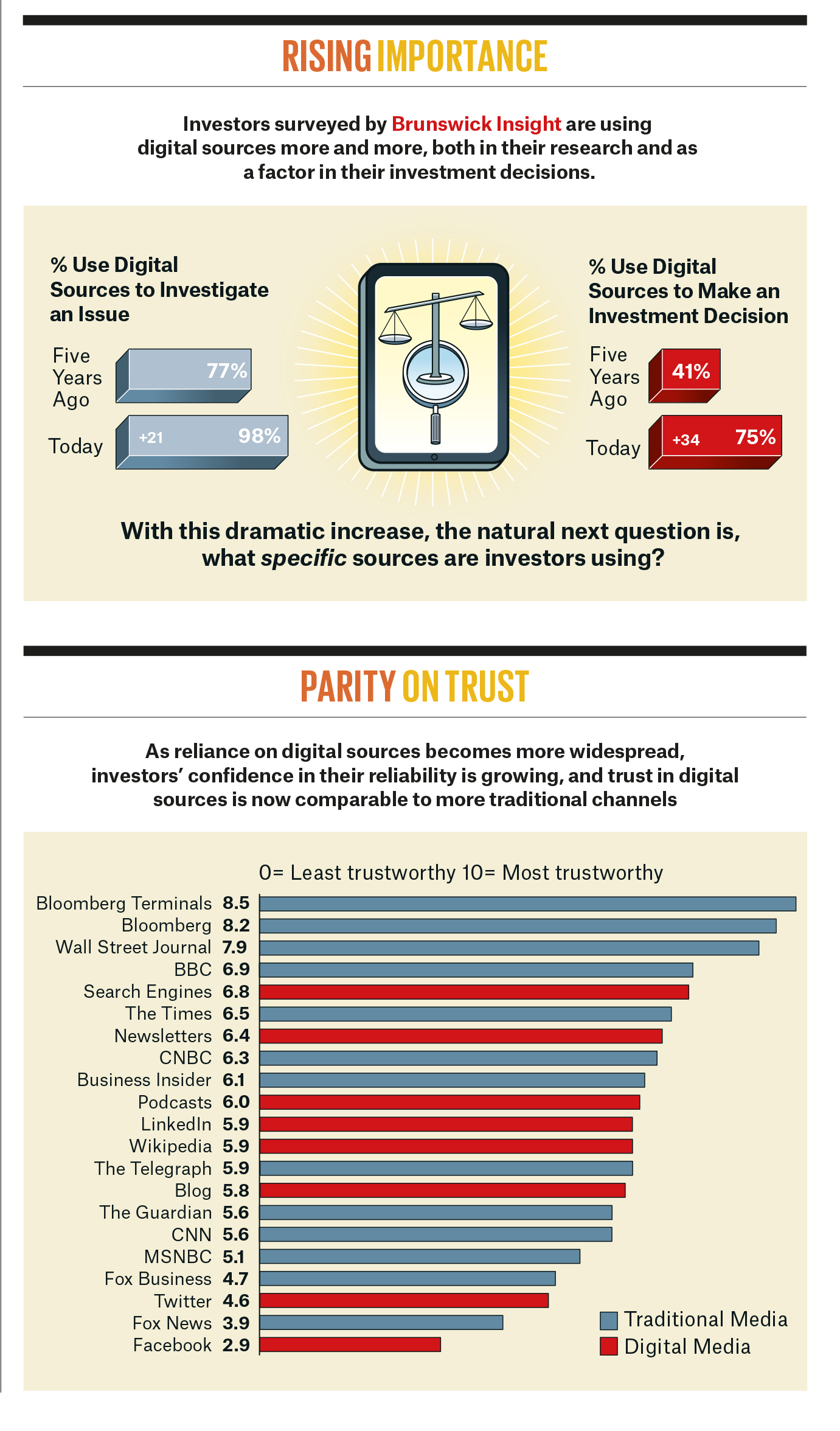 Marshall Manson, a Partner in London, leads Brunswick’s Digital offer in the UK, Europe, Africa, India and other key markets. Noah Kristula-Green is a Director with Brunswick Insight in the Washington, DC office.

This article appears courtesy of the Brunswick Review.

Emerging from the COVID-19 crisis, companies may find they have more to worry about, says Brunswick Partner Charlie Koons.