Dealmakers polled in Brunswick’s 10th annual M&A survey were more optimistic about the outlook in 2017 than in the 2016 election year, signaling the Trump administration could be positive for deal activity.

The survey, conducted in March, polled leading M&A practitioners including lawyers, investment bankers and advisers. Respondents have correctly predicted deal activity for years, but the uncertainty of the political environment may turn the tables.

The effect of the “Trump bump” since the election was evident not just in the performance of equity markets, but in overall deal levels. During Trump’s first 100 days, global cross-border M&A surged despite concerns regarding protectionism through a border adjustment tax and greater scrutiny from the Committee on Foreign Investment in the US (CFIUS).

Global M&A activity for the first quarter of 2017 totaled $678 billion, outpacing Q1 2016 by almost 9 percent, according to MergerMarket. US inbound and outbound activity hit record levels, driven by the promise of corporate tax reform and new appointments to the Federal Trade Commission and Department of Justice, which handle antitrust reviews.

Dealmakers also predicted high levels of activity in the energy and consumer goods sectors; energy deals are up 72 percent in Q1 from the prior year, and a slew of consumer deals have accounted for the largest transactions unveiled in 2017.

Though the Trump administration promises to deliver policy changes in favor of M&A, unpredictability remains the rule in 2017. In fact, most dealmakers (61 percent) don’t expect meaningful corporate tax reform to be implemented until 2018. Year-to-date, the number of deals has dropped while the total value of deals has grown, suggesting a fickle M&A market with some bold companies pursuing large transactions on the bet that Trump will align himself with financial and corporate interests. 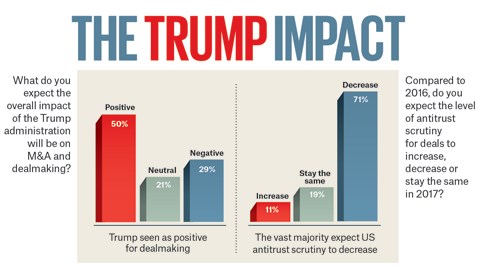 Katherine Kim is a Director in Brunswick’s New York office, specializing in M&A and shareholder activism. Emily Sanders is an Account Director at Brunswick Insight in the Dallas office.

Western Union CEO Hikmet Ersek on the power of human connection and how it is driving the company forward. By Brunswick’s Dave Carlson and Patrick Rutherford.

Private equity has long been cast as one of capitalism’s villains. But through its multibillion-dollar, myth-busting portfolio, Chicago-based Vistria Group is offering a different narrative. The Brunswick Review speaks with their co-CEOs.

What MiFID II did

What effects, if any, have been felt after the new directive launched in January 2018