In 1965, Gordon Moore, later a co-founder of chipmaker Intel, observed that at the rate transistors were shrinking, the number that would fit on to a circuit board would double every year for the foreseeable future, while manufacturing costs would continue to fall. His paper, published in the journal Electronics in April of that year, had the mundane title “Cramming More Components on to Integrated Circuits.” 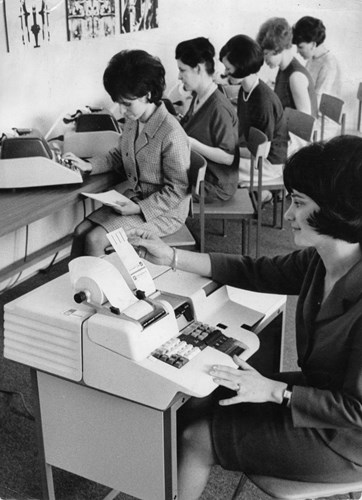 The technology “will lead to such wonders as home computers … automatic controls for automobiles, and personal portable communications equipment,” Mr. Moore wrote. The first wave, he predicted, would be an increase from 64 transistors on a single chip in 1965 to 65,000 in 10 years. In 1975, his estimate was proven eerily accurate: A chip manufactured that year could hold 65,536. At that point, he adjusted the estimate to a doubling every two years.

And there it has remained to this day, far longer and more accurately than even Mr. Moore expected. Known as Moore’s Law, the trend has held the tech industry in thrall for over half a century, becoming the de facto metronome of the digital revolution.

Every time your smartphone needs to be retired in favor of a newer one, you are feeling its effects.

Doubling the chip density at that rate pushes computing power upward on an exponential curve and sets a critical benchmark for digital innovation. The drumbeat of Moore’s Law allows tech companies to anticipate changes and develop functions to exploit them, effectively coordinating the entire industry and permitting a fast, efficient pace of innovation.

To illustrate the boldness of Mr. Moore’s prediction, in 1965, the state of the art in consumer tech was the Olivetti Programma 101, a calculator that could be programmed using magnetic cards – arguably the world’s first desktop computer. Over 40,000 were sold, at a price of about $3,200 each (over $25,000 today). The device could do basic functions including square roots, but also some logical operations, printing out the results on paper rolls like a cash register. NASA used it for calculations involved in the Moon-landing Apollo 11 project.

Today, a standard issue iPhone 8 has billions of transistors on a single chip. It costs under $1,000 and can do all of those boring functions while simultaneously tracking your health, streaming episodes of “Game of Thrones” and texting photos of food.

However, as Mr. Moore himself observed, “no exponential is forever.” Eventually, transistor sizes will reach a point where the tools used to create them physically can’t get any smaller. The chip industry has been warning for years that we are near that critical juncture and it hopes that system architecture overhauls can keep the effects of Moore’s Law on track.

One way or another, we are rapidly closing in on a new inflection point. The future beyond will have to compete with the explosive pace Mr. Moore helped set in motion 53 years ago.

Carlton Wilkinson is Managing Editor of the Brunswick Review.

The Rise and Rise of Benny Pough

From humble beginnings, the businessman became a kingmaker in the music business. He talks to Brunswick’s employees in a conversation led by Anthony Applewhaite and Erika Bell.

Jeremy Geffen started his job as Director of UC Berkeley’s Cal Performances only months prior to the pandemic. He talks to Brunswick’s Carlton Wilkinson about the pressures of planning the world-leading university’s culture seasons.