Churchill and the Flu | Brunswick
Perspectives

Churchill and the Flu

CEOs and business leaders are having to take decisions with potential life or death consequences. Andrew Roberts explores how Winston Churchill was shaped by pandemic, and what lessons his leadership holds.

The only poem that Winston Churchill ever wrote in his long life was entitled Influenza. It was about the epidemic that was ravaging Asia and Europe and which ultimately killed one million people between 1889 and 1890. He was fifteen years old and its twelve verses were published in his school magazine, The Harrovian. It opened with the lines:

Oh how shall I it’s deeds recount
Or measure the untold amount
Of ills that it has done?
From China's bright celestial land
E'en to Arabia's thirsty sand
It journeyed with the sun. 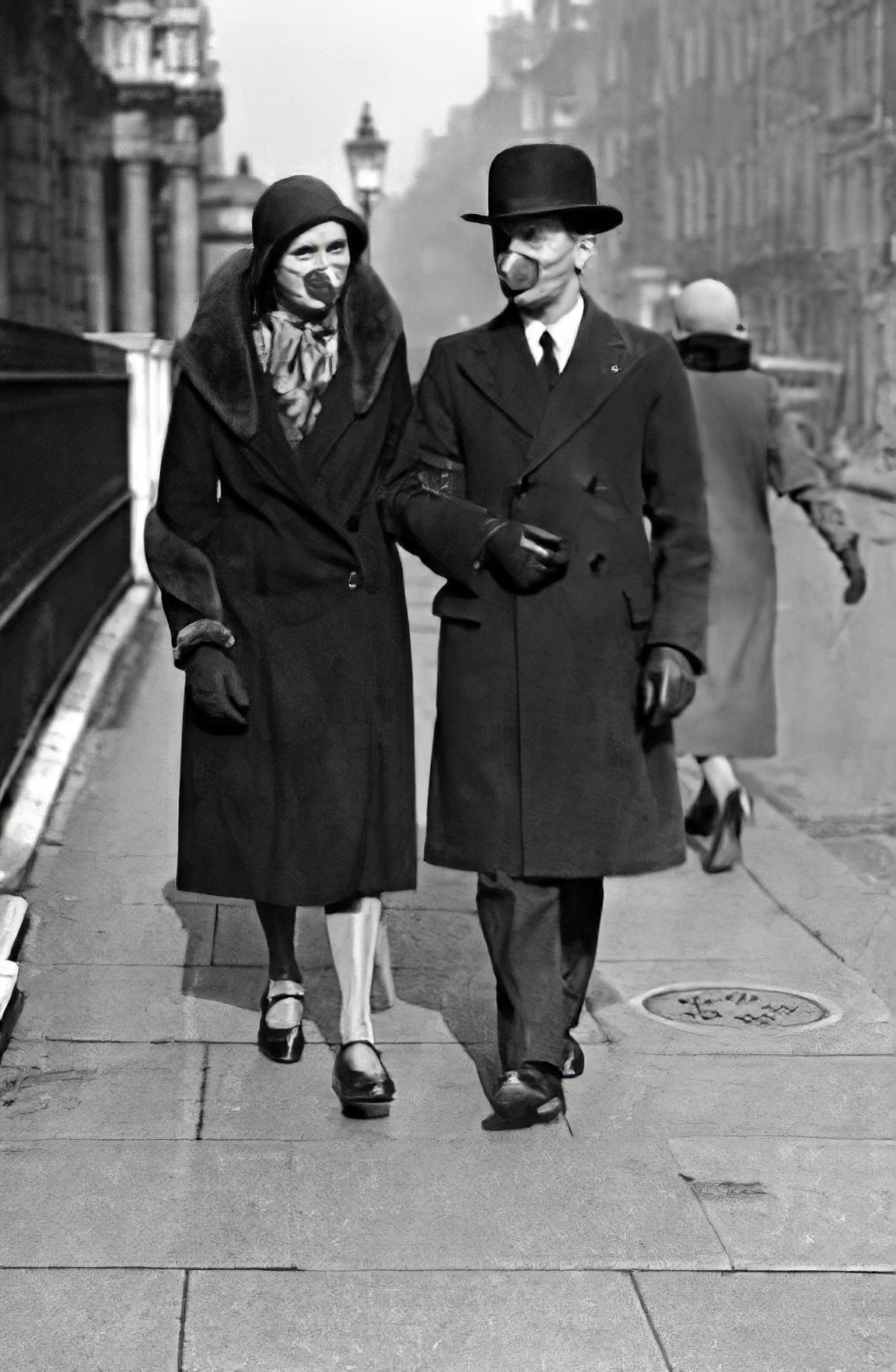 A couple on the streets of London wear masks during the Spanish Flu outbreak-a scene being replayed on the city's sidewalks today.

Churchill then geographically followed the disease’s path westwards in each of the subsequent stanzas until it reached Britain, in a mixture of teenage rhyming juvenilia (‘O'er miles of bleak Siberia's plains / Where Russian exiles toil in chains’) and occasional flashes of the kind of vivid linguistics (“vile, insatiate scourge,” “Whose loathsome hand and cruel sting / Whose poisonous breath and blighted wing”) that were to be heard again six decades later during Churchill’s wartime premiership.

In the penultimate stanza of the poem, the epidemic had weakened:

Its power to kill was o'er;
And with the favouring winds of Spring
(Blest is the time of which I sing)
It left our native shore.

Before Covid-19 leaves our native shores, is there anything that might be learned from Churchillian leadership about our best response to it?

Some leaders have already tried to derive inspiration from Churchill in the current crisis, not always successfully. The BBC reported that the Italian prime minister, Giuseppe Conte, was “quoting Churchill” in his speech to the Italian people when he said, “This is our darkest hour, but we’ll get through.” In fact Churchill spoke about Britain’s’ “finest hour” in his great speech of 18 June 1940, whereas Darkest Hour was the name of the Gary Oldman movie about him.

Churchill saw a great deal of flu and flu-like epidemics in his life, and was Secretary of State for Munitions and later Minister for War during the Spanish Flu of 1917-19. Catharine Arnold, author of Pandemic 1918, tells us that during the first twenty-five weeks of that truly horrific pandemic, no fewer than twenty-five million people died of the disease, which eventually was to kill well over fifty million people and perhaps as many as a hundred million worldwide, many more than the cataclysmic world war that overlapped it chronologically.

The flu—which Allied “fake news” ascribed in their propaganda to being deliberately developed by German scientists, just as German propaganda blamed Allied scientists— became particularly virulent in those places where the war had already led to malnutrition. It is a remarkable statistic that of the 116,516 American military deaths in World War One, no fewer than 63,114 (54.2 percent) were due to disease (mainly Spanish Flu), against 53,402 (45.8 percent) which were due to battle.

The discoveries of healing science must be the inheritance of all. That is clear. Disease must be attacked, whether it occurs in the poorest or the richest man or woman, simply on the ground that it is the enemy; and it must be attacked just in the same way as the fire brigade will give its full assistance to the humblest cottage as readily as to the most important mansion.

Winston Churchill Speech to the Royal College of Physicians, 2 March 1944.

The subtitle that Laura Spinney chose for her book Pale Rider was “The Spanish Flu of 1918 and How It Changed the World.” She explained how the disease had incredibly powerful political, cultural, and social effects on the postwar world, in societies that were still reeling from the military Armageddon. She even ascribes the rise of Churchill’s great opponent, Mahatma Gandhi, and the Indian nationalist movement, in part to the way that millions had died of influenza there, with the British authorities unable to contain it.

“Grave are the times,” Churchill wrote to Sir Thomas Inskip, the Minister for Defence Co-ordination, in a letter of January 1937 about the Nazi rearmament programme, yet he was writing of the influenza from which Inskip was suffering rather than the German threat, and added that he had told Inskip’s secretary not to show him the letter until he had recovered. “I hope you will make sure that you have the necessary periods of convalescence. All my household has been down with this minor scourge, and a certain number of days of complete relief from work of any kind is absolutely necessary for perfect recovery. So far I have survived and If I escape altogether I shall attribute it to a good conscience as well as a good constitution.” The 1937 outbreak was indeed a minor one compared to earlier outbreaks, but while having a good constitution might indeed be useful in mitigating the effect of the virus, there’s precious little epidemiological evidence to suggest that having a good conscience was of much help.

Sir Patrick Vallance, the Chief Scientific Advisor to the Government, has said that if Britain escapes with only twenty thousand killed by Covid-19, as opposed to the eight thousand who normally died of influenza each year, it would be relatively speaking “a good outcome” considering how rampant it is, and of course he was right. It is salutary to think, however, that Britain lost no fewer than 19,240 killed on the first day of the Somme Offensive on 1 July 1916, a battle that was to continue for another five months, and which Churchill denounced as an abominably large loss of life in comparison for the measly amount of ground gained. There were also over 38,000 non-fatal casualties that same day, whereas those who survive Covid-19 will get through it intact, without the loss of limbs and organs associated with the fighting on the Western Front.

In 1940, Churchill had a card placed on the table of the War Cabinet bunker in Whitehall, which can still be seen today in the Churchill War Rooms. It consisted of a quotation from Queen Victoria's letter to Arthur Balfour during Black Week —the worst week of the Boer War, in December 1899—and read: “Please understand there is no-one depressed in this house. We are not interested in the possibilities of defeat: they do not exist.” As homes throughout the country self-isolate through Covid-19, we could do worse than adopt that motto.

Winston Churchill watches a military parade in 1918, the year the Spanish Flu would claim 25 million lives within 25 weeks. He was Secretary of State for War at the time.

Churchill’s daughter Mary Soames once told me never to assume we could tell “what Papa would have thought or said” about any situation or phenomenon that took place after his death in January 1965. Yet it doesn’t take much imagination to guess that his response to Covid-19 would have been a resolute one, guided as he was by scientists, though never dominated by them. “Scientists should be on tap,” he once said, “not on top.” It is certainly a very good thing that our prime minister is an admirer—indeed a biographer—of Churchill.

As CEO and other senior business executives have to take decisions that will have life-changing consequences for their employees, there is another quotation, this time from Churchill’s great speech of 14 June 1940, that might be helpful for them, once adapted from wartime to peacetime exigencies.

“People must have hope, to face the long haul that lies ahead,” Churchill told the House of Commons, only ten days after the Nazis had forced the British Expeditionary Force off the Continent at Dunkirk. “Is the tragedy to repeat itself once more? Ah no! This is not the end of the tale. The stars in their courses proclaim the deliverance of Mankind. Not so easily shall the onward progress of the peoples be barred. Not so easily shall the lights of freedom die. But time is short. Every month that passes adds to the length and to the perils of the journey that will have to be made. United we stand. Divided we fall. Divided, the Dark Age returns. United, we can save and guide the world.”

Andrew Roberts is the author of “Churchill: Walking with Destiny,” and the Roger & Martha Mertz Visiting Reader at the Hoover Institution at Stanford University. He is married to Susan Gilchrist, Chair, Global Clients at Brunswick Group.

This article appears courtesy of the Brunswick Review.