At a time of urgent global hope in medical innovation, Brunswick’s Ben Hirschler pays an inspiring visit to Professor Paul Workman and his Institute of Cancer Research in London.

In 1971 US President Richard Nixon famously declared a “war on cancer”, likening its defeat to the Moon landing—a heroic achievement that had wowed the world just two years earlier.

Half a century on, of course, cancer is still very much with us. Indeed, greater longevity means the chances of individuals experiencing the disease have gone up, not down, for the simple reason that the biggest single risk factor for most cancers is getting older. Yet this belies some remarkable successes. The deployment of an array of new treatments means more people are beating cancer today than ever before. In many Western countries, over half of cancer patients now survive 10 or more years—double the rate of four decades ago—and researchers expect to push survival rates substantially higher in the coming years. 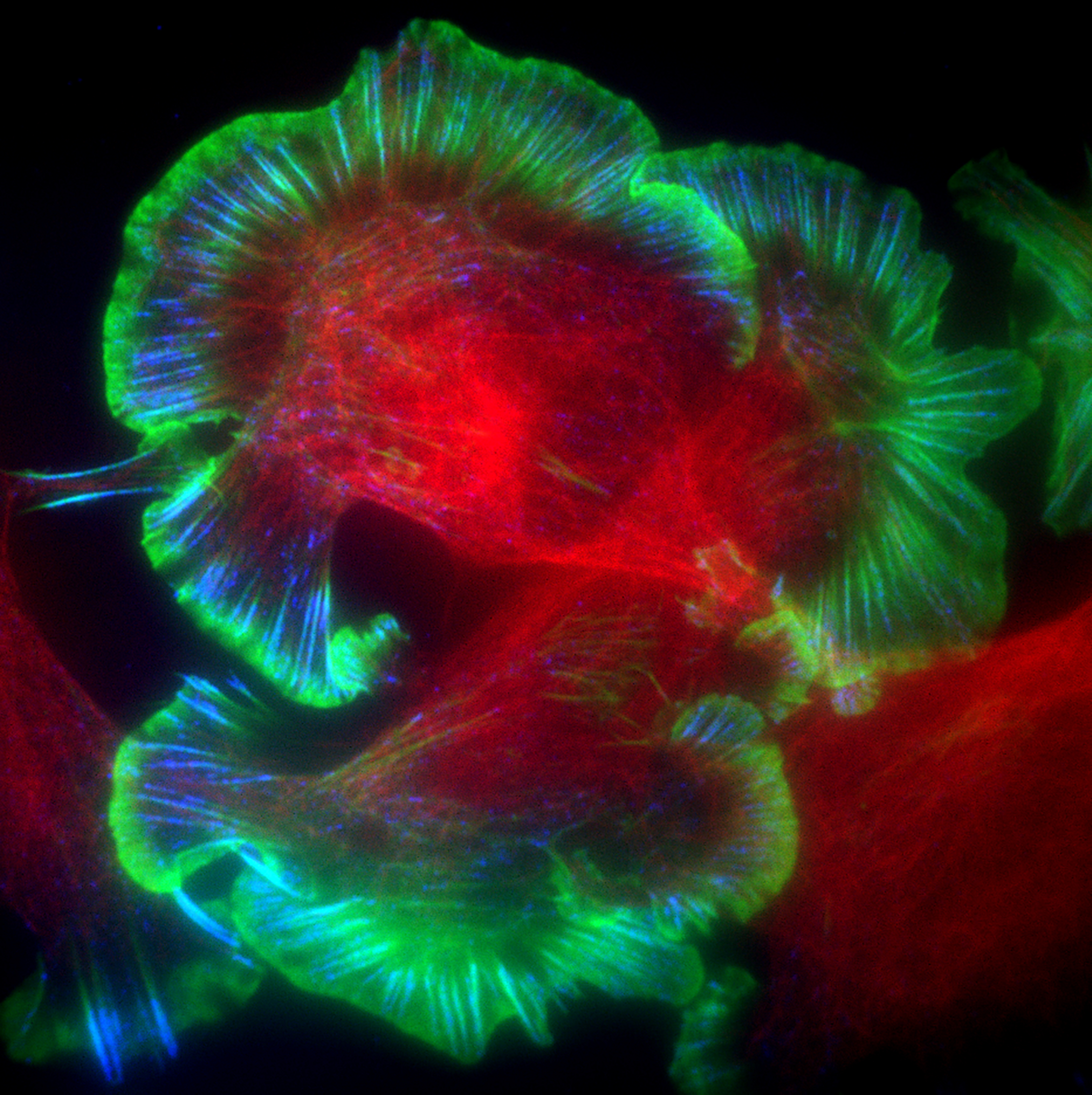 Metastatic melanoma cells are known for their shape-shifting properties and can spread the disease quickly through the body. This color-enhanced image won ICR’s 2017 Science Photography and Imaging Competition.

What does the future hold? Few places know the answer better than the Institute of Cancer Research in London, the world’s most successful academic center for cancer drug discovery.

The US may be the undisputed global leader in bioscience and biotechnology, but the ICR, on the other side of the Atlantic, is a thriving cancer innovation hub.

The institute is a charity and a postgraduate university, funded through a mix of philanthropy and grants, and works hand-in-glove with the neighboring Royal Marsden, a large National Health Service hospital. It is a prime example of how relatively low-budget academic research can complement the commercial activities of global pharmaceutical and biotechnology companies.

That is partly down to its very deep roots. The ICR has been at the forefront of the cancer fight for more than a century: identifying the first carcinogens in smoke and coal tar in the 1930s; contributing to the development of chemotherapy in the 1950s; and helping to discover and develop new tumor-killing platinum drugs in the 1970s. More recently, its scientists have been in the vanguard of personalized or targeted cancer therapies, as well as refining hormone-based treatments and testing drugs that train the immune system to attack tumors. Since 2005 alone, it has discovered 20 drug candidates, 10 of which have progressed into clinical trials.

Now, chief executive Professor Paul Workman has his sights set on tackling the big unresolved problem of cancer: How to stop tumor cells evolving resistance to the arsenal of medicines that humankind has developed against them. Prof. Workman’s team is pushing a novel “Darwinian” approach in drug development, which aims to not just kill cancer cells but also stop their ability to evolve. Modern drugs can work wonders in the short term but tumors all too often develop resistance. Curbing cancer’s evolutionary pathway would deliver long-term control and effective cures, in a similar way that antiretroviral medicines can keep HIV infection at bay.

“It’s not unreasonable to think that in future we ought to be able to manage all cancers, so all patients have relatively long-term survival with treatment side effects that are tolerable,” Prof. Workman said.

He is a biochemist who worked for many years in universities before jumping to “big pharma” with a job at AstraZeneca and then returning to academia. That experience has proven instrumental, allowing him to build a culture at the ICR that bridges different worlds—a tactic that has helped the institute to carve out a special position in the multibillion-dollar drug development chain.

He is now raising philanthropic funding for the culmination of that approach: a new £75 million Centre for Cancer Drug Discovery, bringing together evolutionary scientists with drug discovery researchers and acting as a focal point for public-private partnership.

To some observers, it might seem strange that the world still needs the kind of charity-funded research carried out by the ICR at a time when a wall of private capital is flooding into oncology research. Cancer is, after all, the hottest area of commercial drug research, accounting for a third of the total industry pipeline. The investment rush is buoyed by expectations that current annual oncology drug sales of more than $100 billion will continue to grow rapidly. Yet in practice gaps in the cancer R&D landscape still require a broad academia-based approach.

Despite the billions of dollars that drug companies and venture capitalists are betting on finding new cancer medicines, there are still many cases where investors balk at the risks involved with specific experimental projects.

“It’s a question of where investors’ risk appetite clicks in, and it often doesn’t click in early enough,” Prof. Workman said. “Pharma companies are chasing after drug targets that are very well validated and, therefore, they tend to all jump on the same ones. Even biotech companies have limited ability to go for truly novel concepts because venture capitalists, who provide their funding, have a relatively short time horizon.”

The result is that promising but untested approaches to fighting cancer can fail to navigate the so-called “valley of death” between research and commercially successful innovation. It is a gulf that all nascent technologies face as they move beyond the scope of academic laboratories.

After taking charge of the ICR’s drug discovery in 1997, Professor Workman decided to address the problem by creating a new working model designed to combine elements of commercial and university cultures.

“I could see there was an opportunity for a ‘center of excellence’ model, taking the best elements of academia, biotech and the pharma industry to create something unique in the life sciences ecosystem. That model has been the basis of our success—I think it could also work for other diseases. People have talked to me about doing it in other areas like Alzheimer’s and tropical diseases,” he said.

“We fill a gap in the system because we have the ability to take on exciting new high-risk ideas and push them through.”

The prostate cancer drug abiraterone is a case in point. It was discovered at the ICR in the 1990s. At the time, many scientists believed that once prostate cancer patients stopped responding to initial hormone therapy, it was pointless to keep targeting hormone pathways. Researchers at ICR disagreed, and eventually showed that even advanced cancer could still be treated by disrupting testosterone synthesis.

“It’s a great example of a drug that was initially too risky for the pharmaceutical industry. But by doing the clinical trials ourselves it eventually came through and proved highly effective,” Prof. Workman said.

Abiraterone went on to be licensed to Cougar Biotechnology and its success then prompted Johnson & Johnson to acquire the smaller biotech company. Today, J&J markets abiraterone under the brand name Zytiga and is a standard treatment for advanced prostate cancer. It generated global sales of $2.8 billion in 2019.

One key to success in such programs of drug discovery and development is the ICR’s ability to marry basic and translational scientific research with the clinical insight and expertise provided by the specialist cancer hospital next door, the Royal Marsden.

This, coupled with a keen focus on prioritizing targets and drugs that are potential winners, is part of the “secret sauce” that makes the organization unique, according to Prof. Workman. Now his goal is to apply the ICR’s template to the huge challenge of cancer-drug resistance, with the creation of anti-evolution drugs that “herd” cancers into a corner from which they cannot escape. The approach involves a series of drugs to block evolution. The aim is to force the most aggressive tumor cells to adapt in a way that makes them resistant to one treatment but highly vulnerable to others.

The need is pressing. Oncologists have long known that using traditional “shock and awe” chemotherapy often fails because it helps fuel survival of the nastiest and most persistent cancer cells—just as antibiotics can lead to the development of superbugs. Targeted drugs, too, can fail as mutant tumor cells find new pathways to keep growing. Even immunotherapy, which uses the body’s own immune system to fight tumors, can fall victim such escape routes.

To head off the threat, ICR researchers are using artificial intelligence and mathematical modelling to predict how cancers will react when treated with different drugs. It is starting to yield results. A combination of three targeted drugs has been shown in the laboratory to stop resistance evolving in colon cancer cells and ICR scientists are also working to create new drugs called APOBEC inhibitors that should reduce the rate of mutation in cancer cells.

“The fundamental problem that we face clinically is cancer’s ability to adapt and evolve with time,” Prof. Workman said. “This evolutionary approach is a paradigm shift that is changing the way people think about cancer. If we can understand the mechanisms and predict what is going to happen in tumor evolution, then we have a blank canvas again for finding new ways to fight cancer.”

As an academic group, the ICR will never have the resources to take promising new cancer treatments all the way to market, which makes partnership vital for getting its discoveries to patients. So next on Prof. Workman’s “to do” list is the establishment of a biotech park called the London Cancer Hub on the ICR’s campus in Sutton, 13 miles from central London, to facilitate easier collaboration with industry.

It’s all part of Prof. Workman’s mission to square the circle between the nonprofit and commercial sectors—a tension that has defined his working life.

“You could say my whole career has been driven by frustration with the speed at which discoveries in basic cancer research are translated into benefits for patients. I got frustrated in conventional academia by the lack of scale and organization, so then I went to industry, and I got frustrated there by the restricted commercial focus. So then I came to the ICR and tried to put it all together here.”

Ben Hirschler is a Senior Advisor based in Brunswick’s London office and a former global pharmaceuticals correspondent for Reuters.

Composer John Luther Adams talks to Brunswick’s Carlton Wilkinson about his early activism, his Pulitzer Prize for “Become Ocean” and his hope for the world’s future.

Communications Lessons from the "Last King of America"