Coinciding with Earth Day, President Biden will convene heads of state for his virtual Leaders’ Climate Summit next Thursday, April 22nd and Friday, April 23rd. In the days leading up to the event, the Biden Administration will release its Nationally Determined Contribution (“NDC”) under the Paris Agreement, which will provide updated emissions reduction targets for the United States.

Sources close to the deliberations say this goal is expected to be a 50% reduction in greenhouse gas emissions (from 2005 levels) by 2030, reports Bloomberg. The US will also likely update its longer-term commitment to balancing human-made emissions with CO2 removals (“net zero”) by 2050, and outline specific targets for reducing methane (a potent greenhouse gas), and announce new standards for climate-related financial risk disclosures.

Bringing together 40 heads of state including Xi Jinping (not yet confirmed, but SCMP reports it is very likely) and Narendra Modi, the two-day Summit will include speeches and breakout discussions focused on how countries are working to combat climate change. All G20 countries have been invited to join the summit, which together account for 85% of global GDP, 75% of global trade, 74% of global greenhouse gas emissions and two-thirds of the world's population. The event is viewed as a platform for these leaders to announce their updated emission targets and make other climate-related commitments, which will have major policy ramifications for virtually every sector.

Why is the world watching?

Context: The rubber is hitting the road when it comes to climate commitments vs. climate action. “Whatever Joe Biden says about a ‘transition from the oil industry’ and decarbonizing the US economy, oil prices still matter to a superpower with geopolitical responsibilities,” reported the Financial Times following Energy Secretary Granholm’s recent meeting with Saudi Arabian Energy Minister Abdulaziz bin Salman al-Saud. This line of thinking—on the tension between making ambitious commitments and actually delivering on them—is going to dominate the media coverage and analysis of the Summit and following climate moments this year. It has already shaped the way the media covers corporate climate commitments and has led to many claims of “greenwashing.”

Reducing greenhouse gas emissions by 50% by 2030 will require a fundamental restructuring of the American economy. Since 2005, the United States has reduced emissions by approximately 1.1% annually (this excludes the effects of COVID whereby emissions fell by ~10% in 2020, and is reversing as economic activity resumes), such that emissions in 2021 are expected to be ~15% below 2005 levels. However, halving emissions by 2030 will require a significant acceleration in the pace of reductions, with more than a 5% annualized decline rate from today’s levels. The chart (below) highlights the trajectory required to achieve a 50% reduction by 2030 and net zero emissions by 2050. 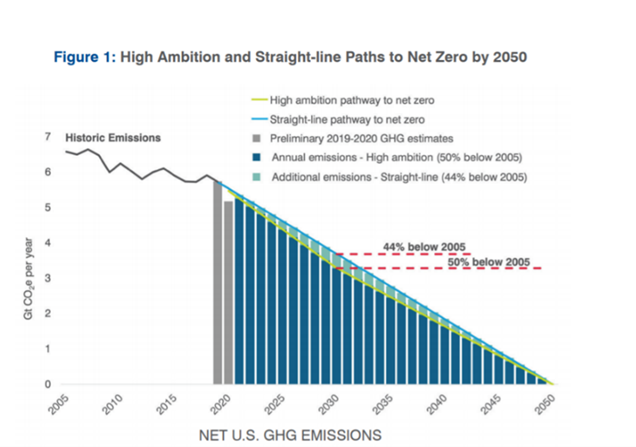 Moreover, reductions will fall unevenly across sectors. For example, the Biden administration is targeting decarbonization of the electricity sector by 2035 given the availability of economically and technologically viable low-carbon solutions. However, harder to abate sectors such as heavy industry, which are significant employers and subject to international competition, may prove more challenging to address in the near term. While there are political barriers to decarbonizing these sectors, some of the technical challenges are being addressed by President Biden through a new ARPA-C program (backed by over $500 million in his recent budget) that will focus on climate R&D and innovative solutions.

It is noteworthy that much of the progress achieved so far has been driven by economic forces. The abundance of shale gas has allowed natural gas fired power plants to displace coal generation in many U.S. power markets.

And while ongoing declines in the cost of renewables and electric transportation will support continued emissions reductions, there will be a clear need to go beyond market forces to achieve the scale of ambition expected in the U.S. NDC. This will require a comprehensive set of policies, likely consisting of a blend of carrots (e.g. grant programs and tax incentives for clean energy, recognition of states and businesses that take aggressive action, infrastructure spending, etc.) and sticks (e.g. carbon pricing or pollution taxes, clean procurement targets, stringent environmental reviews factoring in the social cost of carbon, etc.).

The key questions will be how many of these levers President Biden and Democrats in Congress can put in place, how extensive they will be, and whether they will be durable against lawsuits or future changes in power. Green policy is already top of mind as it relates to clean jobs and green infrastructure, but the decisions coming out of the Summit and the messaging used to communicate them will provide insight into the next phase of the policy debate.

If you have any questions concerning the material discussed in this note, please contact the following members of our Climate team or email [email protected].

With the OECD from 2012 to 2022, Pascal Saint-Amans electrified tax policy discussions and crafted the global minimum corporate tax and other reforms that will have a profound effect on the global economy in coming years. Now a Brunswick Partner, he talks to Carlton Wilkinson.

Implications of the 2022 Midterm Elections

On Sunday October 23, Xi Jinping was confirmed for a third five-year term to lead China until at least 2027.